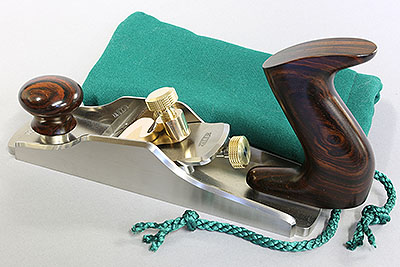 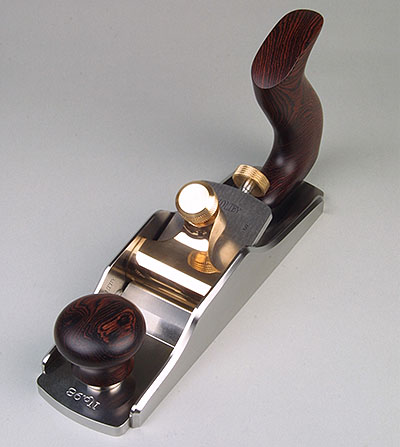 Here is my No.98 smoother - the first plane I designed from scratch rather than adapting and refining classic designs.

I began working on the design in 1998 after accepting an invitation to exhibit at the Exempla 98 Fair in Munich (hence the name of the plane), although many of the ideas incorporated had been with me for some time.

I have noted over the years, other makers attempts to encompass elements of the 98 design into their own work, with varying degrees of success!

Much of what may now be considered as 'modern design', such as the move away from infill, has it's roots in this design. Through the use of modern materials such as stainless steel, the No. 98 has contemporary looks, although the design is firmly rooted in planes of the past.

Throughout my career of restoring planes and subsequently, in the making of planes based on old patterns, I have considered the design challenges faced by the toolmakers of the past. This has lead me to develop new and sometimes novel solutions to the engineering problems they faced, the result being the No.98 and the other designs in the 98 series.
Blade

The greater the blade angle the less chance there is of tearout - high blade angle designs are referred to as York Pitch. The No 98 plane has a bed angle of 22 ½° and it is usual to have a 30° honing angle giving an angle of attack of 52 ½°. By presenting the blade in this format the need for a chipbreaker has been eliminated (I do not believe in the use of chipbreakers anyway). The blade is supported very close to the cutting edge by virtue of its being inverted. Using mitre planes of the same format I found that they worked better as smoothing planes than smoothers and I was therefore determined to design this blade configuration into a smoothing plane. 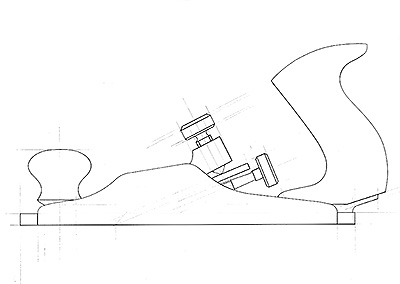 The handles, made from high quality rosewood are an important part of the design. The fixings cannot be seen from the top, contributing to the modern feel of the design.

Much thought has been given to the angle of the rear handle, it is very close to that of (time tested) traditional planes - typical of Bailey type planes and extremely comfortable to hold and use. The handle is fixed to a raised boss (recessed into the underside of the handle) which helps with the strength and allows one fixing to be used without any rotation. The one screw fixes to a full-length 8mm spine.

The front bun handle (mushroom style) is fixed by a similar method and can be unscrewed in its entirety, it has been placed ergonomically with a low centre of gravity, which is much more practical in use than higher handles.

The structure of the No 98 is similar to traditional English dovetail planes. Instead of dovetails joining the sides to the sole I have used a form of integral riveting, which I believe to be an improvement on traditional dovetailing since it places no stress on the body.

The pins that form the rivets are part of the sole plate and are cut using a complex milling process, the illustration below shows the pins being cut.

Using this method all stresses from the riveting are at right angles to the sole and therefore over time the sides will remain perfectly square. The profile of the No 98 is reminiscent of the old Sargeant planes from the U.S.A. - a classic design in it's own right. 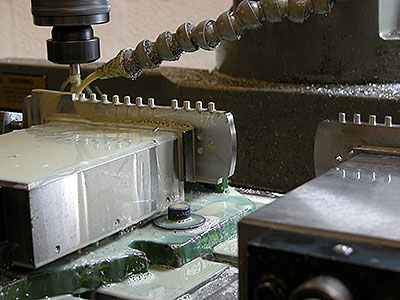 The adjustment mechanism is of the Norris type using differential threads for extra fine adjustment. The adjuster stem is broached into a gunmetal knob. The No 98 plane has a traditional gunmetal lever cap in the style of Mathieson and Norris mitre planes.

Those who use the No 98 will appreciate both the elegance of the design and the precision engineering required to make a tool of this quality.

By the way, I must also mention that the No. 98 plane works rather well too ! 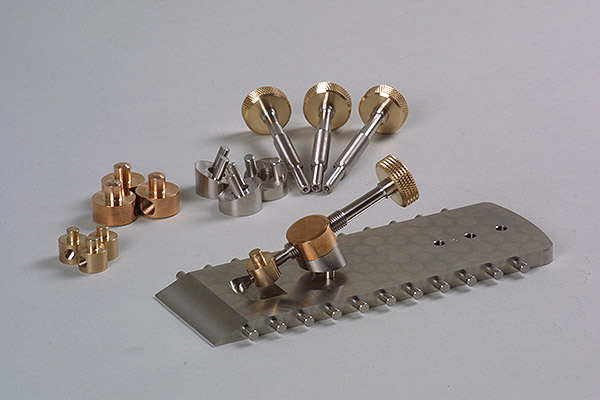 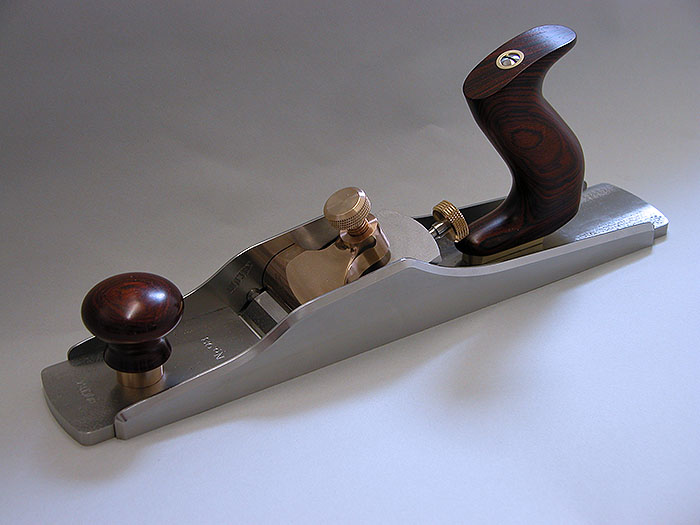 I feel that the design of the No.98 lends itself well to the extension required of a panel plane. 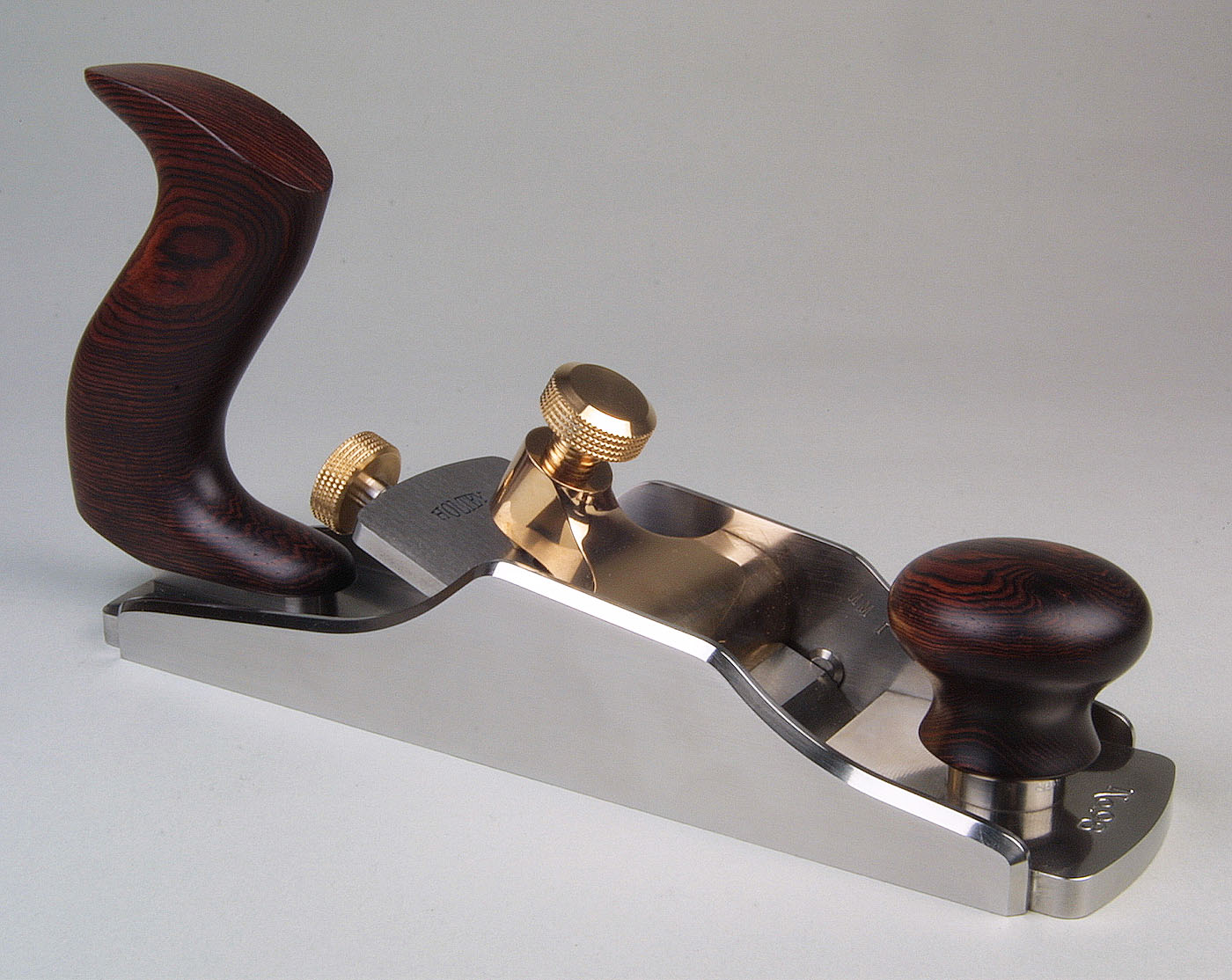 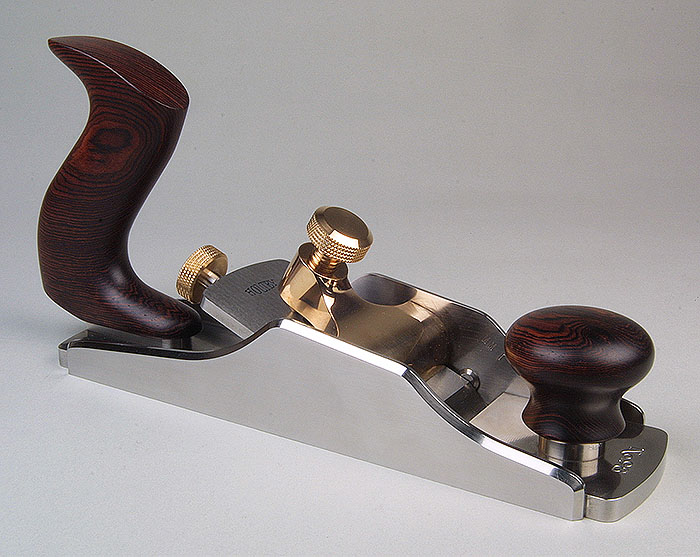